In continuation of its renewed strategy and vigour for effective delivery of its regulatory mandate, the Nigerian Communications Commission (NCC) has created a Digital Economy Department, principally responsible for implementing programmes and policies aimed at fully supporting and promoting the national digital economy agenda of the Federal Government.

The Governing Board of the Commission approved the creation of the new department at its last meeting. The department is strategically and structurally placed under the Office of the Executive Vice Chairman/CEO of NCC.

The EVC of NCC, Prof. Umar Danbatta, said the creation of the new department is in line with the Commission’s strategy to create a dedicated team, with the sole responsibility of giving necessary push to the promotion of digital economy vision of the Federal Government being driven by the Hon. Minister of Communications and Digital Economy, Dr. Isa Ali Ibrahim Pantami.

According to Prof. Danbatta, “placing the newly-created department under the Office of the EVC also underscores the importance the Commission places on the need to successfully drive the overall national digital economy strategy of the government through ensuring its effective monitoring and supervision.”

Danbatta explained that in addition to working with the eight pillars of the National Economy Policy and Strategy (NDEPS) document, the Broadband Implementation Unit in the Commission, hitherto placed under the Special Duties Department and all the staff of the Unit, are to move to the newly-created Digital Economy Department.

Already, Engr. Babagana Digima, an Assistant Director in the Special Duties Department has been moved and designated as the pioneer Head of the new department.

The NDEPS, as a national policy document, was unveiled by President Muhammadu Buhari in November 2019 to add the needed impetus to the actualisation of the Federal Government’s Economy Recovery and Growth Plan (ERGP).

The digital economy policy document has eight pillars, which include: Developmental Regulation, focusing on effective regulation of the ICT and digital sector in a way that enables development; and secondly, Digital Literacy and Skills, which speaks to the provision of policy backing for massive training of Nigerians from all works of life in order to enable them obtain digital literacy and other digital skills. This pillar will also facilitate the training of Nigerians.

Digital Services Development and Promotion is the sixth pillar, which addresses the development of a vibrant digital ecosystem that supports Innovation-driven Enterprises (IDE) and Micro Small and Medium Enterprises (MSMEs) in a way that engenders innovation. The seventh pillar is Digital Society and Emerging Technologies, focusing on tying the development of the digital economy to indices of well-being in the lives of the ordinary citizens; mentoring startups on emerging technologies and deploying their solutions.

The eight pillar of NDEPS is Indigenous Content Development and Adoption, which pivots on the provision of a policy framework that gives preference to digitally-skilled Nigerians for government-funded projects in line with the Executive Orders 003 and 005 of the administration of President Muhammadu Buhari.

As the telecom regulator, the NCC is poised to play a significant role in the overall implementation of the digital economy policy and strategy, hence the need for the Commission to create the new department which focuses on working with eight pillars on NDEPS as well as overseeing the Implementation of National Broadband Plan (NBP) 2020-2025.

While restating the Commission’s commitment to driving the digital economy policy of the government through effective regulation of the telecoms industry, Danbatta affirmed that, apart from infusing new dynamism into the existing digital economy function, the creation of the new department amplifies the Commission’s ‘Regulatory Excellence’, which is one of the five pillars of its Strategic Management Plan (SMP) 2020-2024.

Sat Jul 11 , 2020
Share the StoryIn its move to digitise agricultural sector, the National Information Technology Agency (NITDA), under the supervision of Federal Ministry of Communications and Digital Economy, has adopted 130 farmers into the National Adopted Village for Smart Agriculture (NAVSA) programme to provide Nigerian farmers with means to showcase their farm […] 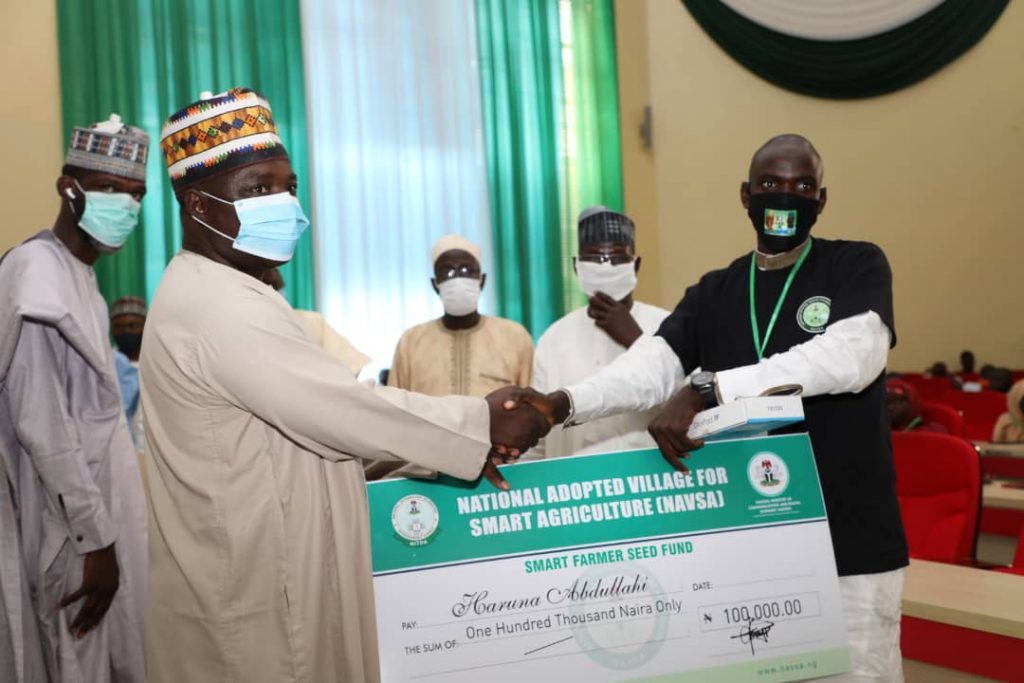