Africa has made a big difference in the race of Artificial intelligence as Uniccon Group a Nigerian Tech Start up, develops the first Humanoid Robot on the Continent called Omeife.

Omeife was officially unveiled at the Transcorp Hilton Hotel Abuja by the Nigeria’s Vice President Yemi Osinbajo represented by the Minister of Communications and Digital Economy, Prof. Isa Pantami, who in turn was represented by the Director-General, National Information Technology Development Agency (NITDA) Kashifu Inuwa Abdullahi.

The Omeife robot has an estimated revenue projection of USD 11.6 billion in three years in the largely vast and untapped market of corporate Africa, according to its promoters.

The Vice President Osinbajo at the unveiling, calls for further domestication of AI to resolve various challenges across all sectors while he directs the National information technology development agency, NITDA to partner with Uniccon for the commercialization of the Omeife technology,”

According to the Vice President, “We need to encourage our indigenous African technology by encouraging our people to be digitally visible and get the data available for the artificial intelligence to use to take decisions that suit us and we also need to connect to the unconnected. To achieve these, the government is expanding its mandate to include initiatives such as the broadband plan to connect the unconnected.”

“Most of the robots we have are not African so we are excited to see Omeife today with African data built and looking African because this will help us to boost our technology locally and to promote our culture and values because if we say we are going to use what is built somewhere, it will be difficult for us to benefit from the artificial intelligence.

The Chairman/CEO, Uniccon Group of Companies, Mr. Chucks Ekwueme, said one of the driving motivations for Omeife is to put Africa on the global map for its contribution in technology.

He said “Omeife brings a lot of value in boosting security depending on the usage if it is surveillance, intelligence gathering, Robo-army, profiling and lie detection or even in the area of sending robots to missions that are very deadly but with the humanoid in place, all these will be taken care of.

The six-foot-tall female African humanoid is a multipurpose and assistance robot capable of remodeling business spaces with the inbuilt ability to speak eight different languages including English, Yoruba, Hausa, Igbo, French, Arabic, Kiswahili, Pidgin, Wazobia and Afrikaans’ and is positioned to provide “language as a service for businesses that need to integrate native African audiences.

Wed Dec 7 , 2022
Together with the Lagos State Government, the economic and technological core of Nigeria, Eko Innovation Centre, one of the leading tech hubs in Nigeria, is organizing the fourth edition of The Art of Technology Lagos (AOT) conference taking place at Landmark Event Centre in Lagos on December 8th and 9th […] 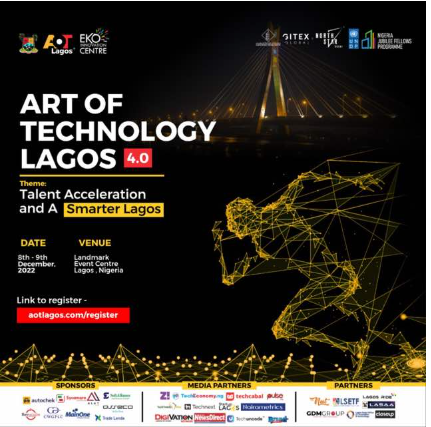