future of work and the nigeria challenge

its interesting and shocking it can be to know and understand that the future of work could come out catastrophic to some and a huge opportunity to others depending on how open you are to innovation. Here we go, first and exciting, Siri would recognize your voice, even if you are 5 metres away from your phone. That new chatbot feels totally real. Self-driving cars are now real, you can analyse your DNA, you tried flying that drone for the first time. A few years from now, and that’s something no longer in our future but in our view, artificial intelligence, robotics, machine learning, mass 3D printing, biotechnology, chatbots, virtual reality, deep learning, drones, augmented reality, smart objects will all be deeply enrooted in our everyday lives. Just like computers, phones, or electricity are for us today. No doubt these development must happen and some are already real with us. So its better you adapt now before it gets too late. For many Life is good, they love their job, they have worked in their postion in that company for long and therefore very comfortable. As a matter of fact the last time they make a presentation they got a standing ovation. They know what you’re good at, people like them, in short they’re safe with their company.

In the meantime, you see an article or two speculating on the future of jobs. The report stating that “45 % of all current tasks could be automated with present technology”. The World Economic Forum estimates that “33% of jobs in 2020 don’t even exist yet”.

Now look the supermarket just introduced self-cashier machine. You’re at the airport checking in luggage, what the heck happened to all the real people at the check-in desk?

Gone. Replaced by machines.  But it’s only the lowskilled jobs right? No, think again. In 2012, there were 150,000 humans working on wall Street. Three years later, automation has cut that number down to 100,000. That’s one-third gone.

If you think it’s only the mathematical scientific jobs better Think again.

See these articles, they are written by algorithm; and we can’t tell the difference with human written content.

And thinking of converging being an online poker player? Too late. There’s an AI that can already beat humans at it.

Journalists, tax consultants, marketeers, technicians, knowledge workers, lawyers, even editing the video, will to some extent have been impacted or automated by technology in a couple of years. And what have you been doing?

Probably watching Netflix. And the problem is machines don’t wait. And the machines they don’t watch Netflix. Now here are the forces at play here? Basically there are 10 million developers out there, using increasingly simple and cheap technology to build new products and services. Some as young as 12 are already coding the future, even that safe company you work for is increasingly under outside threat. And it’s not just the Google, Amazon, Facebook, and Apples of the world that I’m talking about. There are now tens-of-thousands of startups out there, eating away at all sorts of jobs. Now are they creating many jobs in the process?

And as software continues to eat up the world, more companies are trying to replicate these exponential companies. Hire less people, but grow exponentially through technology.

As these happens, job roles are slowly disappearing, and being replaced by skill sets. Employers require you to know an ever growing number of new and ever changing fundamental skills in order to use the technologies they’ve implemented. Master the fundamentals, and you can master the rest.

A Digital skills gap is growing for both mid-skilled and high skilled level jobs. Before you know it, you’ve become irrelevant. However this is not a doomsday prediction. It’s actually a way to leverage technology before it leverages you. And in fact, it’s never been easier to do so.

This made sound kind of corny but it starts with the right state of mind. It’s starts with having a growth mindset, where you have the desire and the confidence that you can learn anything.

Shift your thinking on how these technologies will raddle and mutate, but enrich your work life. Because yes, if you play your cards right, technology will make your work life, and your life in general, much much better. The fact is that technology will actually remove boring repetitive jobs from your way, but only if you understand the fundamentals. And you have no excuse not to do so. How can you stay relevant, if you can’t execute? Can you talk tech? Can you talk API? Can you talk code? Can you talk data? While slow educational institutions are struggling to keep up, that’s not an excuse. Train yourself, take your education in your own hands, learn to code, learn about behavior psychology, automation tools, playing with data, use your experiences, be curious. And if you’re an employer, train your people online and offline courses.

It’s time to build something, your greatest credential in this new era is your output of stuff: proof of your awesomeness. A website, a blog, a prototype, a simple data model. It’s time to build cool stuff and showcase it.

Fri Oct 16 , 2020
Share the StoryThe Minister of Communications and Digital Economy, Dr Isa Ali Ibrahim Pantami, has re-emphasized the resolve of the Federal Government, through the Ministry, to continually advance the digital economy agenda of the country. Pantami stated this while delivering a keynote address at the maiden edition of the National […] 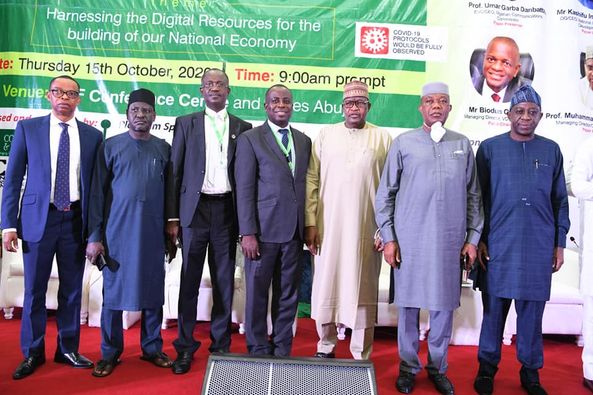