The Federal Government has launched the National Policy on Very Small Aperture Terminal (VSAT) Core Skills, in furtherance of its commitment to empower indigenes with the requisite digital skills for a globally competitive digital economy.

Launching the policy at the Digital Economy Complex, Abuja, the Honourable Minister of Communications and Digital Economy, Dr Isa Ali Ibrahim Pantami, noted that the policy was in line with President Muhammadu Buhari’s digital skills and job creation and economic development Agenda, and the United Nation’s recent global policy on capacity building for citizens in the area of VSAT installation core skills. He noted that against the premise that VSAT is an obsolete resource, it is once again gaining relevance in today’s digital world. 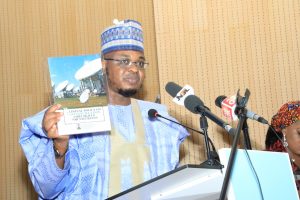 In furtherance to the initiative which was launched under the auspices of the Nigeria Communications Satellite (NIGCOMSAT) which falls under the supervisory purview of the Honourable Minister, the implementation of the policy followed closely, as Dr Pantami officially flagged off the training programme in the six geo-political zones of the country beginning with twelve states namely; Kano, Kebbi, Ekiti, Lagos, Gombe, Bauchi, Abia, Anambra, Niger, Plateau, Rivers and Akwa Ibom states.

Pantami disclosed that “VSAT deployment and installation, is a multibillion dollar industry globally, which will provide jobs in the near future and Nigeria has a population advantage in this regard. It is therefore imperative that we leverage on the immense resources at our disposal to empower our citizens and properly position them on a globally competitive pedestal”.

He further noted that the training was in alignment with several policies of the federal government and strategies including the National Digital Economy Policy and Strategy, the Nigerian National Broadband Plan and the National Digital Innovation and Entrepreneurship policy. He urged participants to make judicious use of the knowledge and the facilities so as not to defeat the objective of the initiative. Six hundred Nigerian youths are currently undergoing the first phase of the training across the country.

According to the minister, addressing the capacity gap in the delivery of satellite-based services is therefore now considered as an urgent imperative to improve the quality of life in communities, especially in remote and rural areas where most of the population are situated.