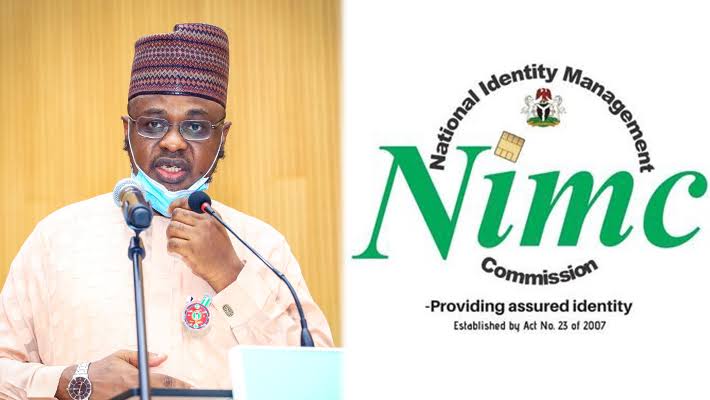 Mobile Network Operators in Nigeria will begin blocking outbound calls on subscriber-allotted lines that have not yet been linked to the National Identification Number (NIN) database as of today, April 4th, 2022.

Professor Isa Ali Ibrahim Pantami, Minister of Communications and Digital Economy, spoke on behalf of President Muhammadu Buhari and thanked Nigerians and Legal Residents for their support during the exercise to link the National Identification Number (NIN) to the Subscriber Identification Module (SIM).

Over 125 million SIMs have had their NINs submitted for rapid linkage, verification, and authentication, according to a statement signed by Dr. Ikechukwu Adinde, Director, Public Affairs at NCC, and Kayode Adegoke, Head, Corporate Communications at NIMC.

The National Identity Management Commission (NIMC) has also issued approximately 78 million unique NINs to date.
President Muhammadu Buhari, as part of the administration’s security and social objectives, issued an order for the exercise’s execution and commencement in December 2020.

Multiple times, the NIN-SIM linking dates have been extended to allow Nigerians to freely comply with the Policy.

“The Federal Government also considered the strong requests made in the past by numerous groups, including the Association of Licensed Telecoms Operators of Nigeria (ALTON), Civil Societies, Professional Bodies, and others, for the extension of deadlines.”
“As a result, Mr. President graciously allowed the numerous requests to extend the NIN-SIM linking deadlines. At this time, however, the government has determined that the NIN-SIM Policy can be implemented because equipment has already been put in place to assure citizen and legal resident compliance. The implementation has an impact on the government’s strategic planning, especially in terms of security and socioeconomic projections. President Muhammadu Buhari has approved the policy’s implementation, which will begin on April 4, 2022.

“As a result, the Federal Government has asked all Telcos to strictly implement the Policy on all SIMs issued in Nigeria (both existing and new),” the statement adds.
Outgoing calls for telephone lines that do not comply with the NIN-SIM linkage Policy will be prohibited from April 4, 2022.

“Before the Telcos can lift the restriction on their lines, subscribers of such lines are thus encouraged to link their SIMs to their NINs.”

“Affected individuals should register for their NINs at designated centers and then link their NINs to their SIMs using the channels offered by NIMC and the Telcos, including the NIMC mobile App.”

“Professor Pantami expresses his gratitude to President Muhammadu Buhari (GCFR) in particular for his unwavering support.”
“He also commends Prof. Umar Garba Dambatta, Executive Vice-Chairman of the Nigerian Communications Commission (NCC), Engr. Aliyu Azeez Abubakar, Director-General/Chief Executive Officer of the National Identity Management Commission (NIMC), as well as their Management and Staff, as well as other notable bodies whose efforts have seen to the monumental success of the exercise,” the joint statement reads.

The Minister also expresses gratitude to the telecommunications companies for their assistance in achieving the desired results.

Pantami further stressed that enrolling for the NIN is a continual process, and that the NIN is a requirement for employment with telcos, banks, the Nigerian Immigration Service, and a variety of other government agencies.
He also urged Nigerians and legal residents to enroll and obtain legitimate NINs at NIN registration locations.

Nigeria's Cybercrime Act Should Be Revised, According to ISSAN

Mon Apr 4 , 2022
Speakers and panelists at the ISSAN Cybersecurity Conference in Lagos, with the theme “Payment Systems Platform Security,” made the case for a strong collaboration and coordinated efforts by all stakeholders, including the government, to combat the rising wave of cyber threats in the country’s payment system platforms. They emphasized the […]