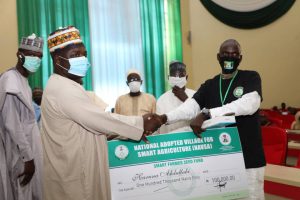 In its move to digitise agricultural sector, the National Information Technology Agency (NITDA), under the supervision of Federal Ministry of Communications and Digital Economy, has adopted 130 farmers into the National Adopted Village for Smart Agriculture (NAVSA) programme to provide Nigerian farmers with means to showcase their farm produce in the digital world market.

The project, piloted in Jigawa State, was initiated to systematically adopt farmers across the 774 Local Government Areas of the country in order to support and equip them with necessary skills that will make Nigeria one of the leading nations in digital farming.

One hundred and thirty (130) beneficiaries drawn from 27 Local Government Areas of Jigawa State were trained and also provided with Smart Devices, Internet Connectivity, Seed Fund worth 100,000 (One hundred thousand naira), and Certified Seed during the official closing ceremony of the event that was held both physically and virtually.

The Executive Governor of Jigawa State, His Excellency, Mohammed Badaru Abubakar who attended the ceremony virtually, appreciated the vision of the Minister for bringing the project to the state and promised to ensure its sustainability.

He also cautioned the beneficiaries against misuse of the materials and knowledge impacted on them. He maintained that the state, in the last few years has produced a lot of millionaires through rice farming precisely.

He said, “Jigawa State will remain grateful for being chosen to pilot this project that will alleviate poverty as well as make the farmers independent in their lives.” He thanked the Ministry of Communications and Digital Economy, NITDA, and other partners for finding his state worthy to kick-start this laudable project.

The Honourable Minister of Communications and Digital Economy, Dr Isa Ali Ibrahim Pantami while delivering his special address said that there is need to come up with innovative ideas that will promote smart agriculture in Nigeria as a means of diversifying the nation’s economy, adding that Nigeria is blessed with a large fertile landmass.

The Minister noted that the National Adopted Village for Smart Agriculture (NAVSA) is part of the main policy of the National Digital Economy policy and strategy for a Digital Nigeria launched and unveiled by His Excellency, President Muhammadu Buhari, GCFR.
He said, the best way to improve the output in the agricultural sector in Nigeria is through the deployment of emerging technologies.

While delivering his welcome address, Director General of NITDA, Mallam Kashifu Inuwa Abdullahi said that the goal of NAVSA is to build digital capabilities and innovations across agriculture value chains aimed at creating massive jobs and improve the income and wealth of every ecosystem player. According to him, currently in Nigeria, agriculture hires about 70% of the workforce.

He said NITDA, together with Ministry of Communications and Digital Economy, conceived the idea of introducing digital platform for farmers, in order to carry them along in Digital Economy journey spearheaded by Honourable Minister, Dr Isa Ali Ibrahim (Pantami).

Abdullahi stated that, NAVSA is designed to take small scale farmers to commercial level using a performance-based approach. The project targets graduates (between the age of 20 to 35 years) with prerequisite knowledge to participate in AgricTech project.

“There is need for farmers to join this journey towards realisation of Dr Pantami’s dream to digitise Nigeria, and this is in line with President Muhammadu Buhari’s promise to lift 100 million Nigerians out of poverty in the next few years. We believe this can only be achieved through innovations, which technology plays a vital role in terms of jobs and wealth creation,” he said.

He added that, NAVSA will enhance digital agriculture strategy, and support Federal Government policy by taking advantage of the growing youth population which constitutes over 50 per cent of the estimated 200 million population; farmers owned an estimated 82 million hectares of arable land, of which according to a research, only 42 per cent is being productively utilised. There are about 126 Million active internet users, 72 Million broadband subscription and 37.8% broadband penetration with 70% target by 2025.

Many dignitaries attended the event virtually in line with the guidelines on Covid-19 by the Presidential Task Force (PTF) and Nigeria Centre for Disease Control (NCDC) to ensure agricultural activities are not badly affected as directed by the President.

Wed Jul 15 , 2020
Share the StoryIn a bid to deliver on it’s roles as the government IT regulatory apparatus, the National Information Technology Development Agency NITDA has called on journalists to be the agent of change by helping to disseminate information with professionalism using up to date tools and know how. Kasifu Inuwa […] 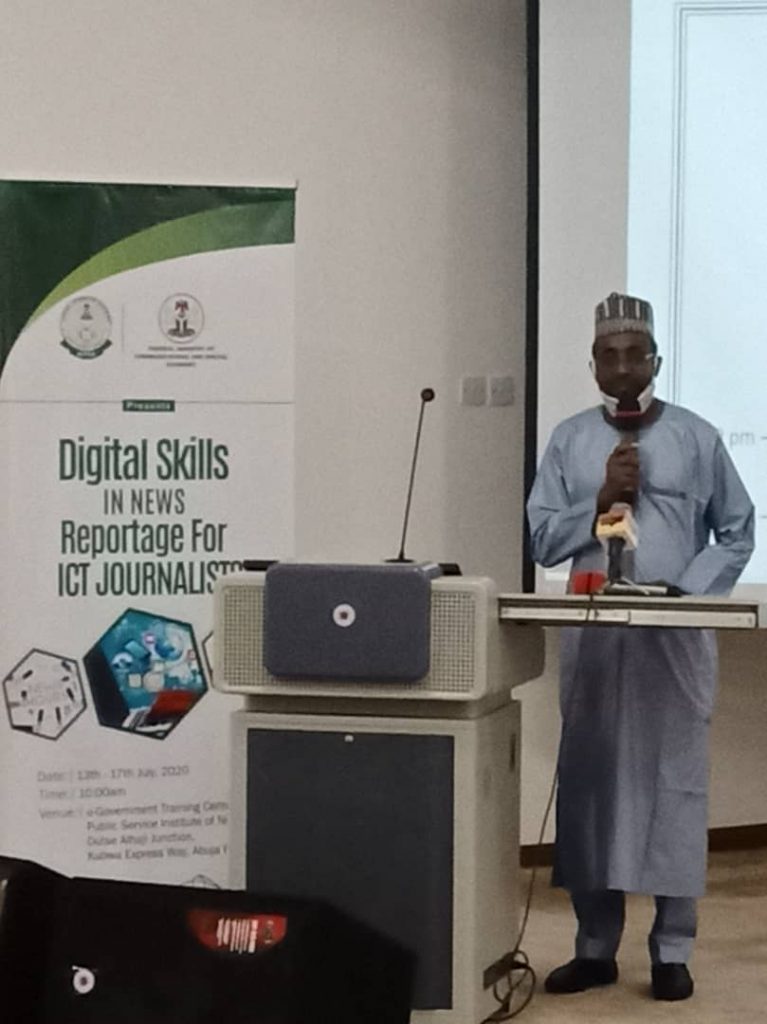