The Nigerian Communications Commission (NCC) has already received two awards, one of which is The REGULATOR OF THE YEAR Award for 2021, signaling a significant year for the Commission. Prof. Umar Danbatta, the company’s Executive Vice Chairman and Chief Executive Officer (EVC/CEO), also got the PUBLIC OFFICIAL OF THE DECADE Award.

The prizes, which were presented during a public presentation titled Public Sector Financing: The Oil Revenue, Challenges, Solutions, and Prospects, eloquently underlined the importance of the telecom sector to Nigeria’s economy. The telecoms industry’s 12.45% contribution to the nation’s GDP in 2020 is noteworthy, as it was instrumental in bringing the country out of recession.

The prizes were handed just two days ago at an amazing event held by Nigerian NewsDirect, a multimedia company, to honor the company’s 11th anniversary at the Federal Palace Hotel in Lagos.

Okubadejo’s article focuses on the nation’s growing reliance on oil income for public sector funding. From the perspective of refocusing on the opportunities and prospects inherent in the oil sector, but particularly in other industries, the paper presents ideas to enhance public sector financing.

The topic of the Lecture and its treatment were not only poignant reflections of the state of the economy, but they were fluent and persuasive of NCC’s role in midwifing and enabling the use of telecoms and ICTs applications for economic recovery and growth, whether by sheer coincidence or deliberate contextual social intervention. A reality that demonstrates the need for the nation’s economy to diversify away from oil, which the Federal Government is pursuing aggressively and for which NCC is a key sectoral driver.

Thankfully, the NCC’s management recognizes the importance of the role it is required to play in advancing Nigeria’s growth and development. Dr. Ikechukwu Adinde, NCC’s Director of Public Affairs, who accepted the honors on behalf of the Commission and the EVC/CEO, emphasized this strategic role and dedication. While expressing thanks for the honor, Adinde stated that the Commission will not rest on its laurels and will instead rededicate itself to demonstrating its merit of the public trust and confidence placed in it as an organization critical to the nation’s economic rediversification.

These garlands, which are adding to NCC’s collection of honors, will come as no surprise to keen observers of national events. The Commission held a historic auction of the 3.5GHz spectrum in November 2021, in preparation for the implementation of 5G services this year. It wasn’t the first time NCC held an auction, but it was the first time it had finished one with a final bid that was more than 30% greater than the first bid offer. The auction, which began with a starting bid of $197.4 million, ended with a final bid of $273.6 million after 11 rounds. The bid was won by Mafab Communications and MTN Nigeria Plc.

Aside from usual tasks, the EVC recently presented the Fountain University’s Convocation Lecture in Osogbo, where he emphasized the importance of youth embracing and exploring the opportunities the ICT revolution has provided them to contribute to the nation’s growth and development.

Similarly, the Universal Service Provision Fund (USPF), an arm of NCC, supported the commissioning of a digital training centre at Ijesa Muslim Grammar School in Ilesha, Osun State, just a day after the Convocation Lecture.

The foregoing shows that the Commission is unwavering in its commitment to expanding the nation’s frontiers of growth and development within the context of its mandate.

Thu Jan 27 , 2022
President Muhammadu Buhari has presented the National Policy on 5G for Nigeria’s Digital Economy, instructing all security institutions to use the technology as soon as possible to improve the country’s security. The Federal Executive Council (FEC) authorized 5G technology on September 8, 2021, after a lengthy deliberation. The president said […] 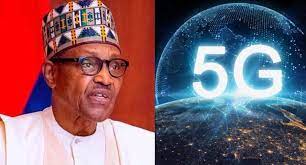