It was a night of glitz and glamour in Lagos as Africa’s foremost ICT broadcast journalist Bayero Agabi marked 20 years of DigiVation Network, the continent’s first IT Media broadcast programme and the only to have won the United Nations Economic Commission for Africa (UNECA) award twice.
The venue, Radisson Blue Hotel, GRA Ikeja, was lit with a colourful and scintillating array of programmes which treated the audience to a delightful experience.

At the centre of the event was the hero of the day and cynosure of all eyes; Dr Bayero Agabi, a distinguished, ace broadcaster who walked the turf of ICT reportage and advocacy first in Africa and literally had entrenched himself into the Continent’s “Digital Hall of Fame”.
This was evident in the presentation to the ICT broadcast trailblazer by members of ICT Broadcast Network who have also carved a niche for themselves yet with so much gratitude for Agabi’s mentorship.
The present, with the image of the ICT legend clad in gladiator outfit with an heroic expression holding a sword and a shield, was perhaps the height of the event as it elicited admiration from not just Agabi, the recipient, but also from all the audience.

ICT Broadcast community presenting to Bayero Agabi during the ceremony

“This is my true personality,” Agabi said emphatically as he held up the pictorial image amidst cheers and admiration.
“A warrior, who’s dogged and tenacious; who never gives up. Indeed I am proud of this, and I say a very big thank you (to the team who presented the gift).”
Agabi, who pioneered ICT broadcast journalism in 1999, is famous for his enlightenment and advocacy programmes which are targeted at promoting the IT and digital ecosystem.
In his 20 years of ICT broadcast experience and digital evolution, Agabi has championed consistent policies that saw to the creation of the birth of several government agencies during this period. 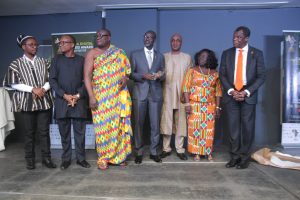 Dignitaries at the event 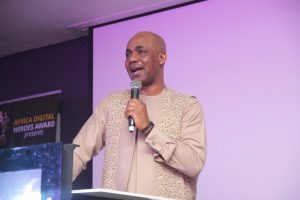 Encomiums for a Pace-Setter
Meanwhile, eulogies were also showered on Agabi who many described as a blessing to the ICT sector. Many submitted that his roles in the IT industry remain verdant for the future generation to benefit from.
Speaking, ATCON President Mr Olusola Teniola commended the ICT broadcast icon, saying “Agabi is instrumental to IT development in Nigeria just as the media has been instrumental to assist the voice of associations, in particular, ATCON.
“Without our voice being heard, there will be no advocacy. The industry has been on a journey and ATCON’s partnership with DigiVation, under my leadership, has seen a revitalized, confident and more daring media organization and journalistic approach to some of the very pressing issues, which might not have been made possible but for the tenacity and determination of Dr Bayero Agabi to drive  advocacies and enlightenment programme which had on many occasions influenced policymakers.”
Also speaking, CEO Medallion Communications, Ikechukwu Nnamani, said: “Bayero Agabi is one of the key people that the country owe a lot of gratitude to.
“Looking at today, if you follow all his platforms whether the TV and the online, you will realise that he has wide range of audiences, especially on the online platform where he reaches more people. On a daily basis, he is disseminating information on current affairs, technology information that people should keep abreast of in order to be aware of everyday happenings.

“And if you follow him closely, especially on social media, you might not need a better place to get information. Like for me, I don’t go elsewhere to get information; all I do is to go to his platform and read his posts for that day. And that is the level of impact he has been able to the development of the industry. I am personally grateful God for his life and I wish him more fruitful contributions.”
Corroborating, President Nigeria Internet Registration Agency (NiRA) Mohammed Rudman, described Agabi as a catalyst in promoting ICT development in Nigeria.
“He’s a catalyst. He interacts with other key stakeholders to promote ICT development. And he has been organizing events. One of such is the one held in Kano state, which focused on bring people together to see how the spirit of innovation can be instilled in our youths. We congratulate him; he’s doing a fantastic job.”

In his remarks, Founder and Executive Vice Chairman Computer Warehouse Group (CWG) Mr Austin Okere said “Bayero was one of the first set of people I knew when we started CWG in Surulere. When we started it was Bayero and his cohorts in the media that made CWG a household name. What he (Bayero) has done to the growth of the ICT industry in Nigeria cannot be overemphasized; he is a pillar and I see him going to greater heights.”
“The ICT sector of the media has actually been doing a fantastic job. And Bayero’s DigiVation has been a leading organization in that area of media service. Everyone knows him and wants to associate with him because of his roles and contributions to the media and ICT sectors. I urge him to continue to do this and continue to bring out the best in the industry,” Biodun Omoniyi, VDT Communications, stated.
The event also saw performances from music artistes such as Holyman, and comedians who thrilled the audience to an exciting night.

Wed Dec 4 , 2019
Share the StoryWith the rate at which the digital revolution is fast changing the way people interact, interrelate, and how businesses research, produce, deliver products and services, and settle financial transactions in the modern world, Dr. Bayero Agabi, President, Centre for Cyber Awareness and Development (CECAD), Lagos, has called on […] 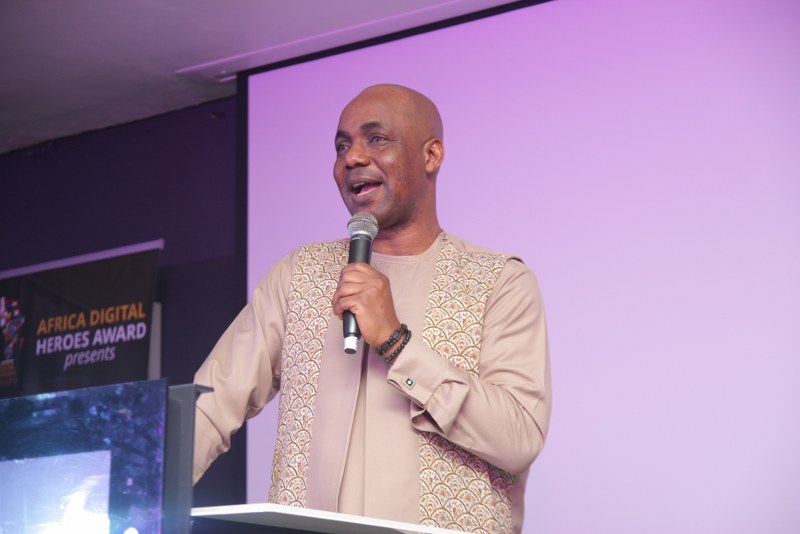